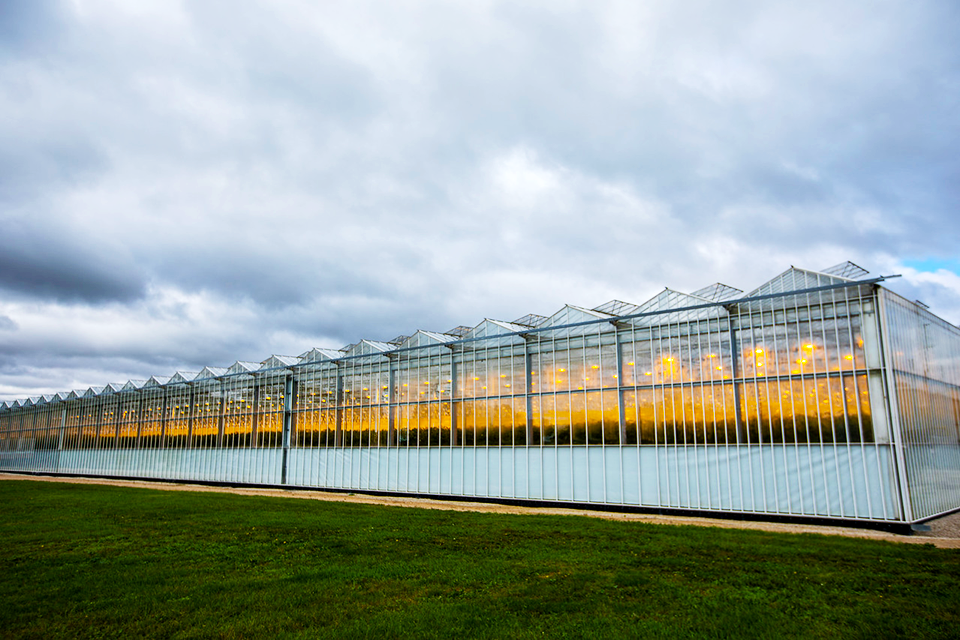 This tomato grower is boosting production, quality and savings with LEDs

Ontarians know they can count on their local farmers and growers for reliable, quality produce. Finding new ways to grow a more consistent supply of quality produce sustainably is important – not only for feeding the province, but also for keeping Ontario’s growers competitive.

Great Northern Hydroponics knows this well. The Kingsville, Ontario-based company grows 10 varieties of tomatoes in its 70-acre facility. In 2019 alone, it produced over 9,000 kilograms of tomatoes, processed and packaged on site, and then sold to grocery retailers under the Village Farms label. Since beginning operations in 1998, the company has been finding new ways to grow quality produce more efficiently, including recently with help from Save on Energy incentives.

See how Save on Energy Retrofit program incentives can help greenhouse growers.

Great Northern Hydroponics’ operations are in one of Ontario’s prime fruit, vegetable and cannabis-growing regions, the Kingsville-Leamington area. The Independent Electricity System Operator (IESO) expects electricity demand in this region to grow by more than 200 percent between 2018 and 2026.

The greenhouse sector is driving much of this demand, as more operators use grow lights to supplement natural sunlight and to extend their growing seasons. But some companies, such as Great Northern Hydroponics, are also innovating to be more energy efficient so they can save on costs and boost the quality of their tomatoes along the way.

An evolution to LEDs

Great Northern Hydroponics first began growing tomatoes in the late 1990s, in a 50-acre conventional facility. In 2011, it added a 15-acre greenhouse with supplemental lighting and growing controls, so it could grow tomatoes year-round and gain a competitive edge.

“We were the first tomato grower to light a crop commercially in this area,” says Guido van het Hof, president and general manager at Great Northern Hydroponics. The company’s goal today is to “achieve perfect integration between agriculture and technology, using techniques that are environmentally sustainable and responsible.”

Like many other greenhouse growers in Ontario and around the world, Great Northern Hydroponics first used high-pressure sodium (HPS) lighting to supplement sunlight in its facility. A decade later, the company decided it was time to move to a more energy-efficient option: light emitting diodes (LEDs).

LEDs can use up to 50 percent less energy than HPS lights.1 They can also last five to 10 times longer, helping growers to save on replacement costs (and on maintenance time).

Historically, horticultural lighting to supplement sunlight has used red and blue light. However, some plants may benefit from a wider spectrum of light, including amber and green light. That’s where white LEDs, sometimes called “full spectrum” lights, come into play. In the Wageningen study, full spectrum white LED top lighting yielded good results for getting more growth out of tomato plants.

“Light recipes are easier to control with the help of LEDs,” Van het Hof says. This means fruit, vegetable and cannabis growers can potentially have better results with LEDs than with HPS lights. He notes that, with cannabis, for example, some research suggests cannabinoid levels can increase. 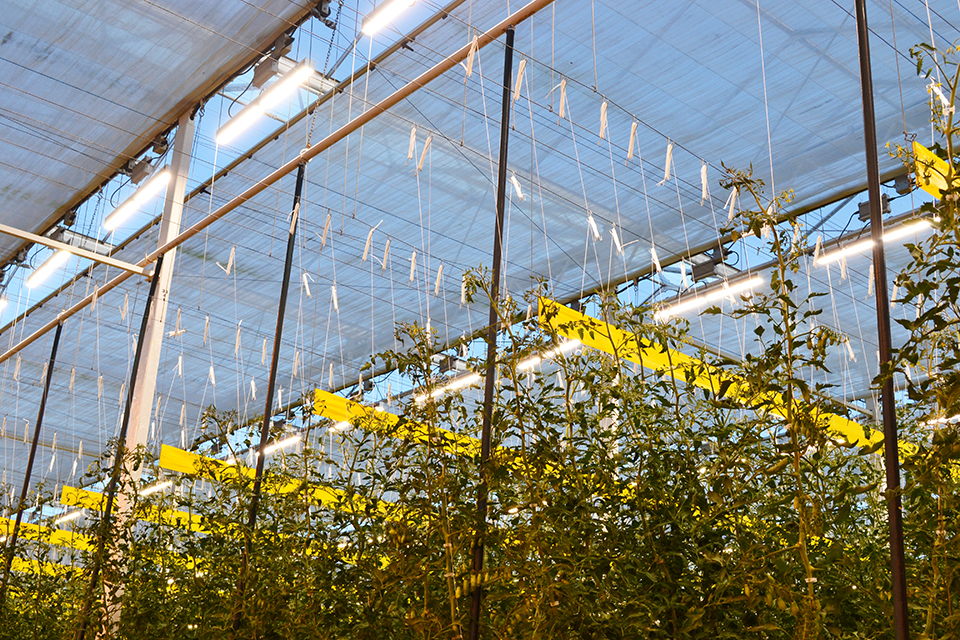 Moving to a more sustainable future

As its first step, Great Northern Hydroponics replaced half of the HPS lighting it uses for growing tomatoes in its 15-acre facility with just over 3,400 LED lighting fixtures. With help from Save on Energy Retrofit Program incentives, the company was able to save significantly on the upfront costs of the installation. Van het Hof also describes this as a quick, “plug and play” upgrade, which meant the company didn’t have any downtime during the project.

The new LEDs are part of an overall energy-efficiency strategy at Great Northern Hydroponics, which uses measures such as energy curtains and an automation system to control light and heat and to save energy. The system* allows both the new LEDs and original HPS lights to automatically adjust based on available sunlight. “If it’s a clear sky, the lighting capacity goes down to 50 percent,” van het Hof explains.

Great Northern Hydroponics also works with its sister company, Soave Cogeneration, to generate power onsite through cogeneration, or combined heat and power. This power can be fed into Ontario’s electricity grid when called upon during periods of high demand. Reciprocating engines generate electricity and the by-products – heat and CO2 – are, in turn, helpful for plant growth and fertilization.

It’s here that LEDs have also been beneficial for curbing natural gas use and saving on longer-term maintenance costs. Before installing LEDs, the facility used three engines at part-load capacity (about 80 percent of the maximum) to meet its electricity demands. Now, with more energy-efficient lighting, it can run just two engines at full capacity. “This is better not only for saving on natural gas, which makes us more sustainable, but it also creates less wear and tear on the engines,” Van het Hof says.

Following its LED upgrade, Great Northern Hydroponics is projecting an annual operational savings of about $150,000. It is also now exploring LED options for cucumbers, peppers and strawberries.

Upgrading to LEDs has had some other benefits. “The lighting ergonomics are better for our staff,” Van het Hof says. That’s because white LED lighting is easier on the eyes than red or blue lighting, making working in the greenhouse even more comfortable for employees.

Most importantly, he says Great Northern Hydroponics is now hoping to replicate the results from the study in which tomato yields increased -– creating an even stronger, sustainable revenue stream for its business. “If we can get to a point where we grow the same volume of tomatoes each week all year long, our retail partners would love that.”