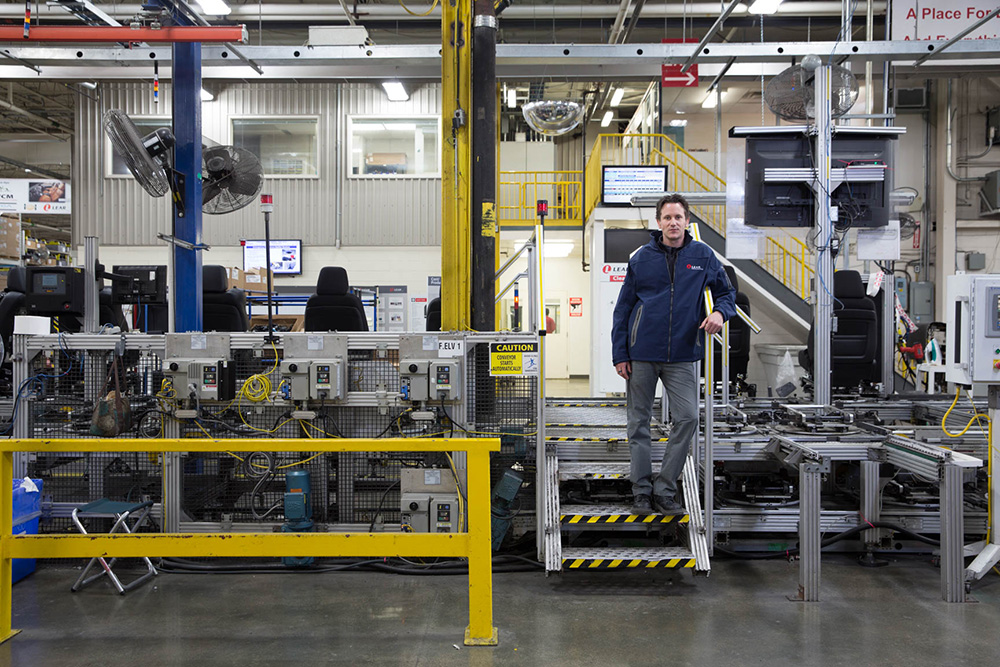 Energy management is part of a journey of continuous improvement, and no one understands this better than Luke Carson and Dan Drouin.

As the Engineering Manager at Lear Corporation’s Ajax plant, where seating is manufactured for the automotive industry, Carson and the Lear Ajax team are not only responsible for managing the daily energy efficiency initiatives that add up to significant annual savings, but also for reducing the plant’s and its products’ long-term impact on the environment.

“Lear operates in a highly competitive global arena, and my role is to keep a firm grip on the plant’s energy costs,” says Carson. “The lower our operating costs, the more competitive we are as a plant, and that also helps Lear to compete globally.”

Early on, the team replaced two 150-horsepower air compressors with two high-efficiency 50-horsepower units. One compressor runs all the time to meet production requirements, while the second, which is also less noisy, stays idle until additional power is required.

“The old system accounted for as much as 10 to 15 per cent of the plant’s electricity consumption,” says Operations Manager Drouin. “You can imagine how much more efficiently we’re running now with the new system.”

Next on the team’s list were lights. For many organizations, energy-wasting lights are a significant drain on operating costs, and Lear Ajax was no different. Roughly 20 to 25 per cent of the plant’s operating costs went to lighting the 114,000-square-foot plant, which operates 24 hours a day, six days a week.

With financial incentives provided by the Save on Energy Retrofit program, Lear Ajax replaced all of the plant’s interior lights with energy-saving T8 fluorescents, as well as exchanging exterior lighting for high-efficiency wall-mounted LED fixtures. The upgrade resulted in annual cost savings and other benefits the team had not foreseen.

“The new bulbs are great because they turn on instantly. Before, anytime we needed to restart the plant, we’d have to wait five to ten minutes for the lights to warm up. That was a frustrating and costly delay to our operation. But now the lights turn on instantly, with no delay.” In addition, Carson says the exterior lighting retrofit has made the facility’s parking lot much brighter, and that visitors and staff have commented on an improved sense of security.

In the spirit of continuous improvement, the Lear Ajax team most recently installed a vacuum pump that not only removes condensation from the steamer wands used to smooth out upholstery wrinkles, it’s quieter for employees at the point of use and reduces energy consumption on the compressed air system. Upgrading to more energy-efficient battery chargers for the plant’s forklifts has also added to the plant’s overall cost savings.

For the Lear Ajax team, while these various projects have helped to lower down the plant’s energy costs, there is always more work to be done. “Energy efficiency is what our team is doing to contribute to Lear’s overall sustainability mandate. We’re always on the lookout for the next opportunity.”

Learn how the retrofit program can change your business for the better.