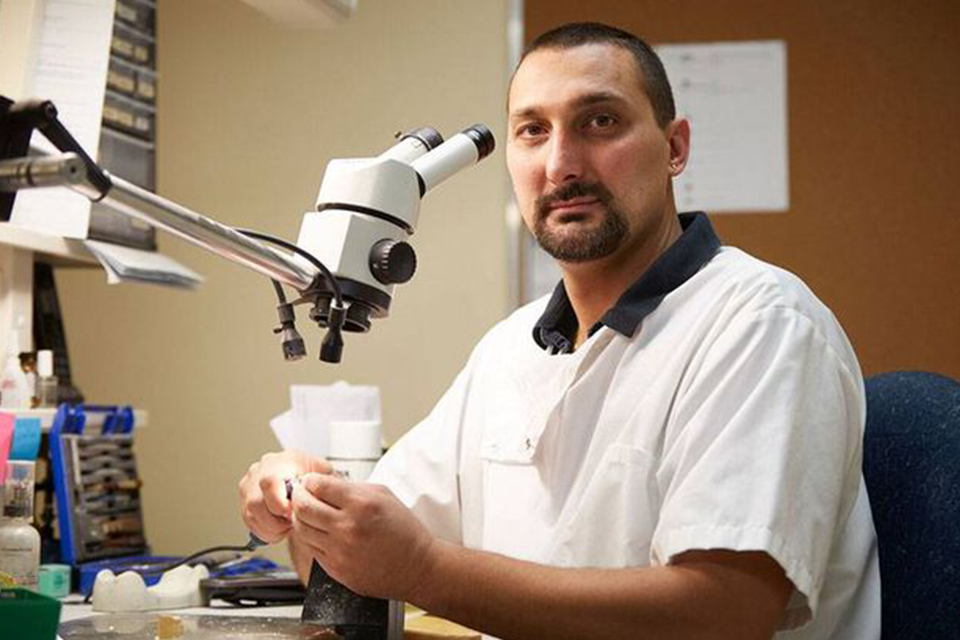 How small changes to its operations helped this Toronto dental lab cut its energy costs.

As the proprietor of Weber Dental Laboratory, a small dental laboratory with six employees in the west end of Toronto, Slavko Ljubinkovic was facing fast-growing energy bills. “Sometimes they could be up to $500 a month, which is a lot for a small business,” he says.

In an effort to reduce energy consumption, Ljubinkovic, a registered dental technologist, started with small changes in his operations. To take advantage of off-peak rates, he began running the company’s machines – which make dentures, crowns and dental implants for dentists and orthodontists – overnight instead of during the day. He also began turning off the exterior sign at night, since the company doesn’t rely on walk-in business.

After determining that lighting was the primary driver of the laboratory’s energy bills, Ljubinkovic approached his local hydro company, Toronto Hydro, about a Save on Energy small business program that offers a free lighting assessment and up to $2,000 in incentives to offset the cost of an upgrade.

After the assessment, which recommended replacing all incandescent and fluorescent lights with new energy-efficient light fixtures and LED bulbs, he learned that with the Toronto Hydro incentive, his share of the cost for this conversion would be about $1,140.

For many small businesses, an investment like this makes economic sense. LED lights are up to 75 per cent more energy efficient than conventional lights, and can pay for themselves in one to three years, depending on the hours of operation and the age of the lights they replace.

“With the Save on Energy small business energy-efficiency programs, you can get double-digit savings of 10 per cent and up,” says Jennifer Grado, who leads the conservation and demand management business development team at Toronto Hydro.

While Ljubinkovic believes that lighting is key to reducing electricity consumption, Grado points to other potential cost-saving areas as well. Through the Save on Energy program, incentives are available to qualifying businesses that will cover up to 50 per cent of the cost of energy efficiency upgrades.

“Almost any energy efficiency measure a small business can think of would probably be covered under the program,” she says. So when Weber Dental Laboratory replaces any of its equipment or machines, it might qualify for a rebate if it can find a more energy-efficient model.

The laboratory could also install new light switches in the bathroom and other low-traffic areas, with occupancy sensors that turn the lights on and off automatically when a person enters or leaves.

Grado points out that, while most small businesses are driven to conserve energy in order to save money, energy-efficiency measures are also an important way to differentiate a company and attract customers who want to support green businesses.

A version of this article appeared in The Globe and Mail in October 2017.

Learn how you can save on energy with small business incentives.